Hollywood movie producer Jay Stern takes a photo with his phone along the Erie Canal, just before Lock 17.

Dave Casullo brought the pair to Little Falls, hoping that they would find the kind of environment that would bring them back. Farnsworth is his cousin and is from Little Falls, growing up at Caroga Lake during his youth.

Farnsworth has entered into a three-picture deal with Damascus Road Productions, underscoring different aspects of World War II with an emphasis on the Holocaust, a subject near and dear to his heart.

The three movies will focus on courage and resilience with stories portraying the triumph of the human spirit. 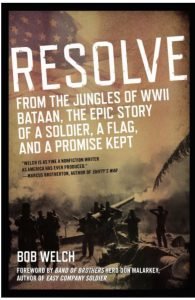 The first movie, Resolve, is an action/adventure, telling the true story of Clay Conner, Jr., leader of a band of soldiers in the Philippines, who steered clear of Japanese capture and the horrific Bataan Death March. He formed a guerilla fighting unit composed of G.I.’s, Filipinos, and dangerous indigenous natives. Eluding capture for 34 months in the jungle, Conner and his ragtag crew fought mightily, playing a pivotal role in the Japanese surrender.

When Farnsworth was looking at some of the old buildings in Little Falls, he remarked, “these buildings really play well for us, where they look like they were from Germany in the 1940s.”

According to Farnsworth, they’ve done a lot of scouting in Syracuse, Utica, and now Little Falls. “There are a lot of buildings here where you can really see the visuals.”

Principal photography on Resolve is to begin after the COVID-related bans are lifted, potentially as early as August, with simultaneous production in Upstate New York as well as Los Angeles and Manila in the Philippines.

Farnsworth said, “It’s a pretty large budget for the three films, coming in at between fifteen and twenty million each. We’ll do a theatrical release, and Sony Pictures is our partner on this for distribution. It’s exciting.”

In the last couple of years, Farnsworth has done seven or eight movies with Sylvester Stalone, Bruce Willis, Al Pacino, and others. “This is the first time that I’m actually producing myself, so I’m bringing in other producers to help.” 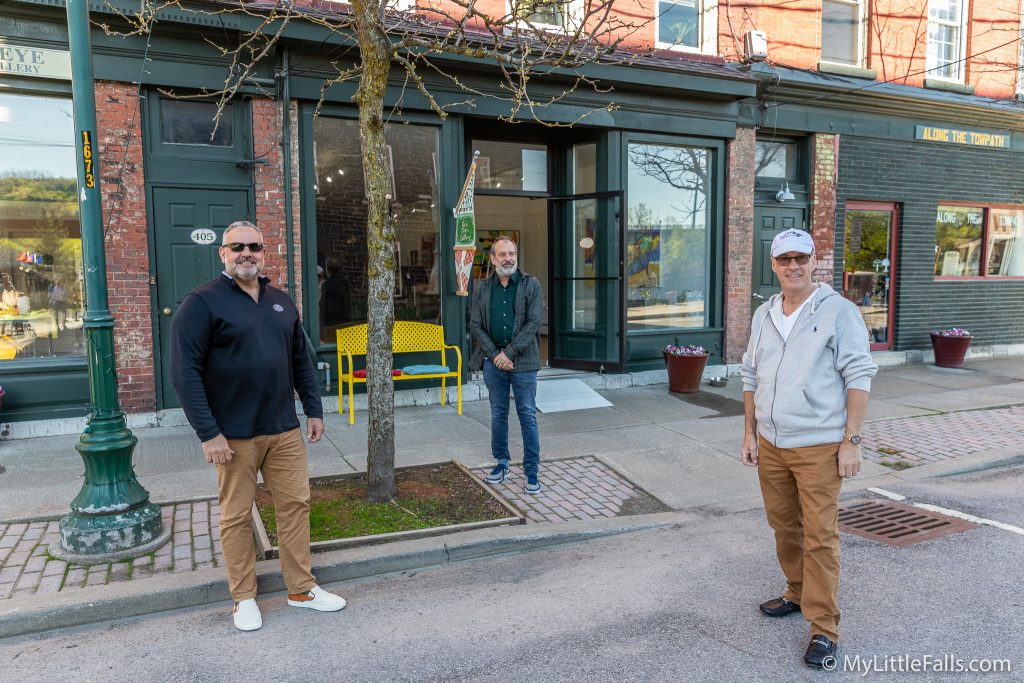 Jay Stern has credits like the Rush Hour trilogy, Mother’s Day, Horrible Bosses, Equals and Say My Name, under his belt.

He said, “I’m working with a company called Damascus Road, which is just a superb group of people that make family movies with positive messages. Ryan O’Quinn is the CEO and Heather O’Quinn is one of the main executives, along with Bob Whitmore, head of finances.”

Ryan O’Quinn is well known to the faith-based audience as the star and executive producer of the 2016 movie, Believe, distributed by Sony Pictures and Freestyle.

Stern said, “what we look for, and what I’m really impressed by in Little Falls, is the variety so that we can shoot the entire thing in one location basically.” 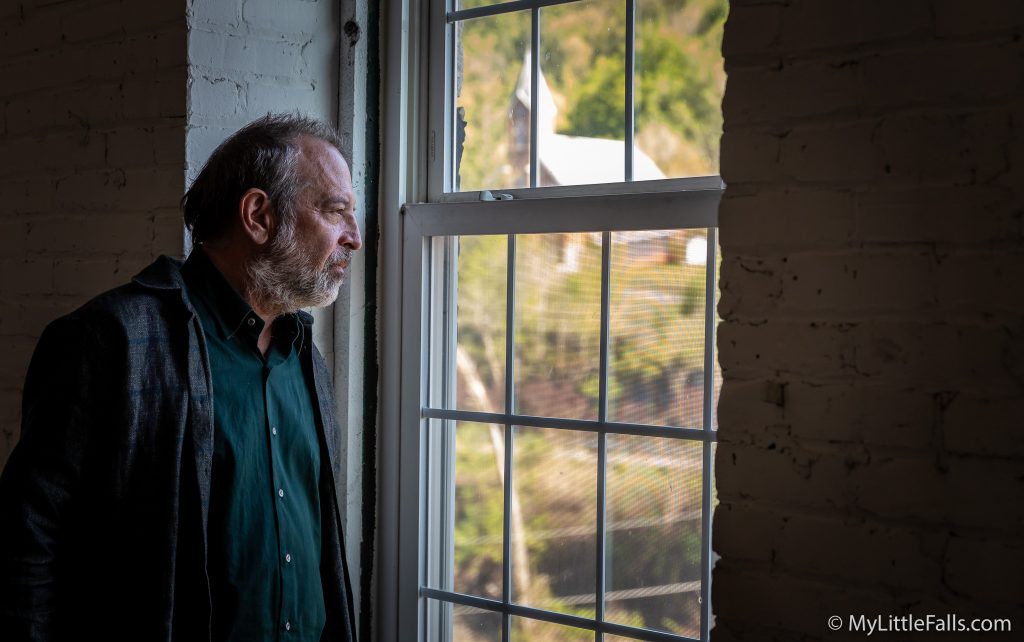 Photo by Dave Warner – Jay Stern peers out of the fourth-floor window of Stone Mill at the Mohawk River below.

Also working with the team is Jackelyn Viera Iloff, founder of Starlighter Films and Entertainment. Said Jackelyn Viera Iloff, “I am so thrilled to be working with this incredible team of film professionals. As a producer, my mission is to share hope, faith, and inspiration through the storytelling of the human condition. I can’t think of a better time to be out there sharing compelling stories in a world so uncertain and in such turmoil.”

Stern said that Little Falls is ideal for any number of movies that they plan on making over the next several years. 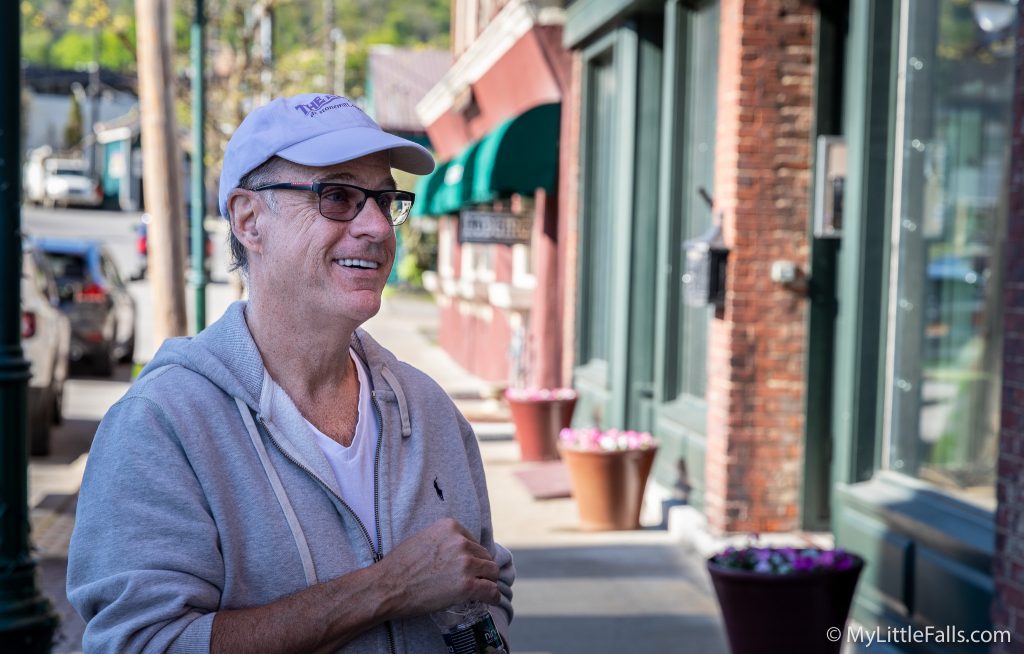 Photo by Dave Warner – Ted Farnsworth spends some time looking at locations to shoot three of the upcoming films that he is producing.

Mayor Mark Blask said, “Little Falls is a cinematographer’s dream. We’re excited about the interest that they’ve shown in our community. And like the production crew from the movie ‘A Quiet Place,’ discovered, we’re the perfect location for producers and directors to create Hollywood level feature films.”

At the end of the day, Farnsworth will be the Executive Producer and producer of all three of the first films.