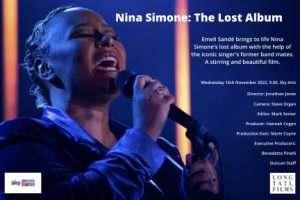 Stephanie Sheppard is a Little Falls resident, and 52 years ago, she and her brother wrote eight songs for the legendary Nina Simone to perform. Unfortunately, Simone died before any of them were recorded. Longtail Films, out of England, made a documentary about the lost music and found just the perfect performer to bring them to light.

In the film, superstar Emeli Sande sets out on an emotional journey to bring to life that set of songs written for Nina Simone but never performed. Forgotten for all these years, these songs are beautiful and shine a light on Nina Simone’s world. They are messages from the past.

The film has never been shown in the United States, so we’re going to make this a party. Join us as we watch the film, hear from the film’s creators in England with a pre-recorded presentation, and then get Stephanie’s perspective as she fills in the details about being at the center of such an important historical work.

After that, we’ll have some wine, cheese, and live music. Details will follow shortly.

The film’s run time is approximately 105 minutes, then the prerecorded presentation and Q&A with Stephanie. Please plan to spend the evening with us!

About Longtail Films: The Emmy, RTS, Grierson, BAFTA winners and nominees have joined forces at Longtail and have a consistent track record of delivering returnable series and breakthrough singles for Netflix, National Geographic, Reelz, Discovery, The BBC, Channel 4, and ITV. They only work with the very best photographic talent and storytellers. Their team includes a Sunday Times best-selling author. They are Journalists by training and filmmakers by craft and seek out stories that truly affect how we live.

If you sign up for remote access, we will give you a link prior to the event to watch in the comfort of your home.