Nathan Nirschl (L), Hannah Straney, and filmmaker Adam Muro discuss the filming of their as yet, untitled work.

Hannah Straney has returned to Little Falls, and she wants to dance. She started her career in Utica and is now teaching at Utica Dance where she began, and at Just Dance Studio, which just re-opened in Canal Place.

Straney went to SUNY Purchase, and after that, went to New York City. “I started working odd jobs and then finally booked a gig with a dance troupe in Brookly. Unfortunately, Coronavirus shut everything down after I’d only been there a year and a half and everybody had to reconfigure what they’re going to do,” she said.

Being in the City was pretty scary

“It’s unfortunate, but at the same time, it gives you an opportunity. I came up to just escape the pandemic and have some space and safety. Being in the City at that time was pretty scary.”

She has a residency program that she is just starting, and part of her idea was to create dance films. “Earlier in September, I’d had Connor Speetjens come up for five days and we put together a short video that has yet to be edited and finished. Now, Nathan Nirschl is here and we’ve been working for the past four days to create phrase work, material, and trying to put together an idea for what we’re doing.”

She’s calling the piece that they were filming on Wednesday in the Vincent Building an untitled work, which was being shot by Adam Muro. “It’s trying to put together different mediums to form something brand new. We’re transferring dance to film and then creating something completely different than would be seen by the naked eye,” she stated. 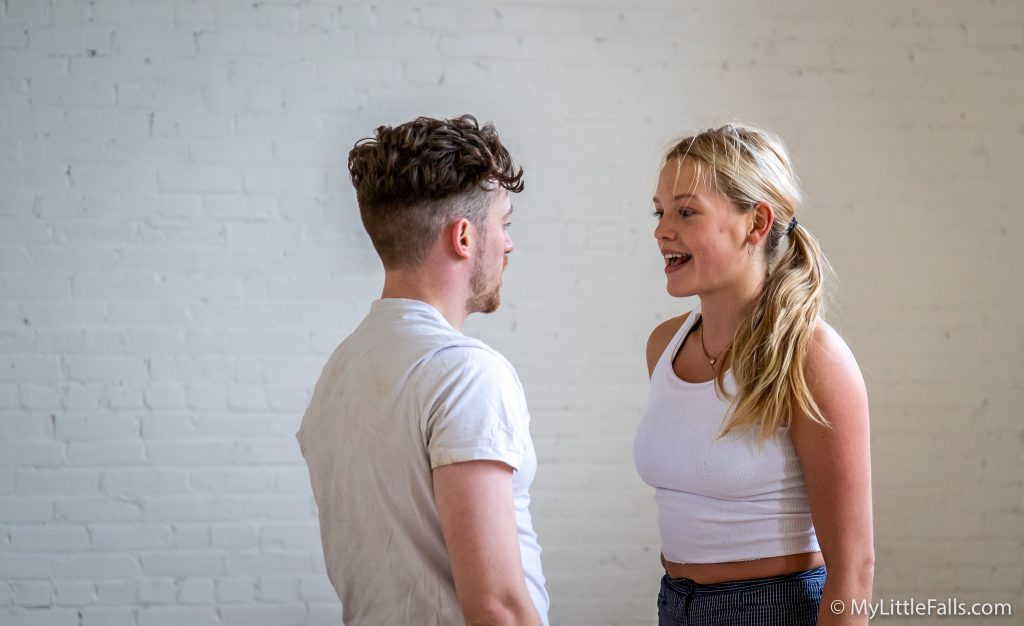 Photo by Dave Warner – Nathan Nirschl and Hannah Straney discuss some of the dance moves they’ll be doing.

Nirschl is from the Seattle Washington area, and he started dancing when he was 16. He moved to New York to go to SUNY Purchase, which is where he met Straney. “We did four years there and then graduated. I moved to New York City after going home for a couple of months.”

In November of last year, he was hired by The Dash Ensemble which had been started by Gregory Dolbashian. “I’ve worked with him for about three years. I do the project management for that company and I’ve done some freelancing gigs as well. Of course, recently, our season got canceled, so I stayed in the City.”

We were looking for space to shoot

Straney had invited Nirschl to come up to Little Falls to work on this project with her. “She’s been asking her friends to come up here and create whatever they feel they need to create, so we collaboratively got together in the studio and spent 20 hours or so making material to see what would work best in space,” he said.

“Her friend Adam reached out and graciously said he’d be happy to film, so he came today. Yesterday we were looking for space and we said, hey, there are some people in that building so let’s see what’s going on,” stated Nirschl.

He said that running into Daniel Preston while they were looking for a space to shoot was just a fluke. “He was super gracious and super kind and he lent us this space to shoot the film we’re making.”

Straney said, “Hopefully, what we’ve put together will touch people.”